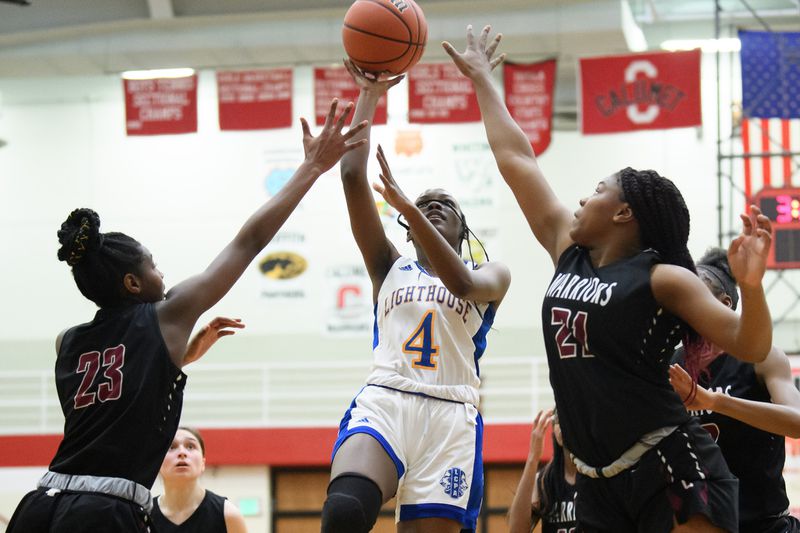 Chris York is the new coach at Calumet, which reached a sectional final last season as junior guard/forward Jasmin Barker (23) and the Warriors lost 52-51 to Lighthouse during a game on Saturday, Feb. 8, 2020. (Kyle Telechan / Post-Tribune)

The former Hanover Central girls basketball coach has taken over at Calumet.

More involved with cross country and track throughout his career, York jumped back into basketball with both feet.

“I’m glad to have this opportunity,” York said. “It’s something I need to do.

“I know Calumet has great facilities. From coaching against them over the years, I know they’ve had good talent and they work really hard. I’m really excited about it.”

With his children getting older and more involved in various activities, he stepped away from the Wildcats’ job and moved away from basketball for close to a decade, save for two seasons as a boys assistant at Hanover.

But in 2019, when Seils had a health issue, York served as Wheeler’s interim coach from Thanksgiving until the end of the season. That experience sparked York, a 1990 Hanover graduate who’s entering his 27th year as a seventh grade social studies teacher in the district.

“I knew I wanted to be a varsity coach again,” he said. “I got that taste again.”

York applied for a half-dozen positions last season, including being a finalist at Calumet. When the job opened again, he didn’t hesitate to apply again, this time becoming the Warriors’ fifth coach in four seasons.

They went 11-12 last season, when they had two coaches, for their best record since going 14-7 in 2011 under longtime coach Dori Downing. They nearly won their first sectional title since 2008, also when they were led by Downing, losing 52-51 to Lighthouse in the Class 3A Calumet Sectional final.

“I admire what Dori did when she was the coach,” York said. “They always competed.

“You want to be competitive in the conference and in the sectional. I’m going to reach down into the middle school and higher elementary school to see what’s going on to make sure there’s cohesiveness in the program. Any successful program is going to have that. I just want to get to know the kids, know and understand the culture, and create a culture.”

Seils will be an assistant. Joyce Falls will remain with the program as the junior varsity coach and varsity assistant.

“We were able to retain her and we’re very glad to have her back,” York said of Falls. “She knows the girls very well. She’s somebody in the community.”

York reflected on his time coaching Hanover Central with a degree of wistfulness. The Wildcats won three straight sectional titles from 2008 to 2010 under Doug Nelson, now Kankakee Valley’s coach.

“I’ve been successful teaching, successful in cross country and successful in track,” York said. “We had some success in basketball, but a lot of our records weren’t great. I look back and wonder, with the girls we had, if I would’ve stuck around and didn’t leave to spend more time at home, if I could’ve had that success.

“It’s a little bit of a void. I want to come in and build something again, and have that success now that I didn’t have then.”

“I started out as a running coach who coached basketball,” York said. “Now I’m a basketball coach.”