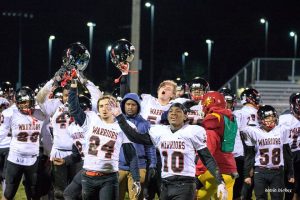 Photo by David Bisbee
For only the fourth time in school history the Calumet Warriors football team will be playing for a sectional championship. This comes after a 32-13 victory over River Forest. On Friday night the Warriors turned around 7-6 halftime deficit by scoring 26 consecutive points and mounting a 32-7 lead in the 3rd quarter. River Forest tacked on a late touchdown to close the gap, but the Warriors were able to hold on to the lead and clinch a spot in Friday’s final against Knox. The Warrior defense turned in a collective effort with a interception return for a touchdown and several key punt returns that tilted the field on a muddy surface. On offense Calumet was able to use its signature style of spreading the ball around to several players in order to keep the Ingot defense off balance.
That style must be in full effect this Friday when the Warriors host the 10-1 Knox Redskins for the Sectional 25 title. With a win the Warriors would clinch the school’s first ever Sectional championship. Kickoff is at 7:30 PM local time
Warriors Official Sponsor