Warriors Official Sponsor
The Calumet Warriors started their playoff run on Friday at home against the Hammond Wildcats after posting only the second 1-loss regular season in program history. The Warriors raced out to a 57-0 halftime lead after touchdowns from Mark Flores, CJ Cooper, Chris Black, Phillip Collins and a safety by Jerrell Johnson. Mert Can added 5 first half extra points to round out the first half scoring. After a strong defensive second half the Warriors topped the Wildcats by a final score of 69-0. They look to continue their winning ways in round 2 of sectional action this Friday against River Forest, a team the Warriors defeated 44-0 in week 8. With a victory, Calumet will make only their third appearance in a sectional final game. 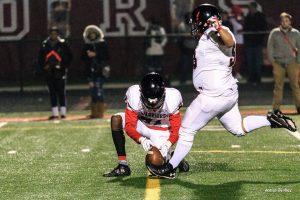